Teaching Handwriting: The Truth About Pre-Cursive Handwriting and the Lead-in Stroke 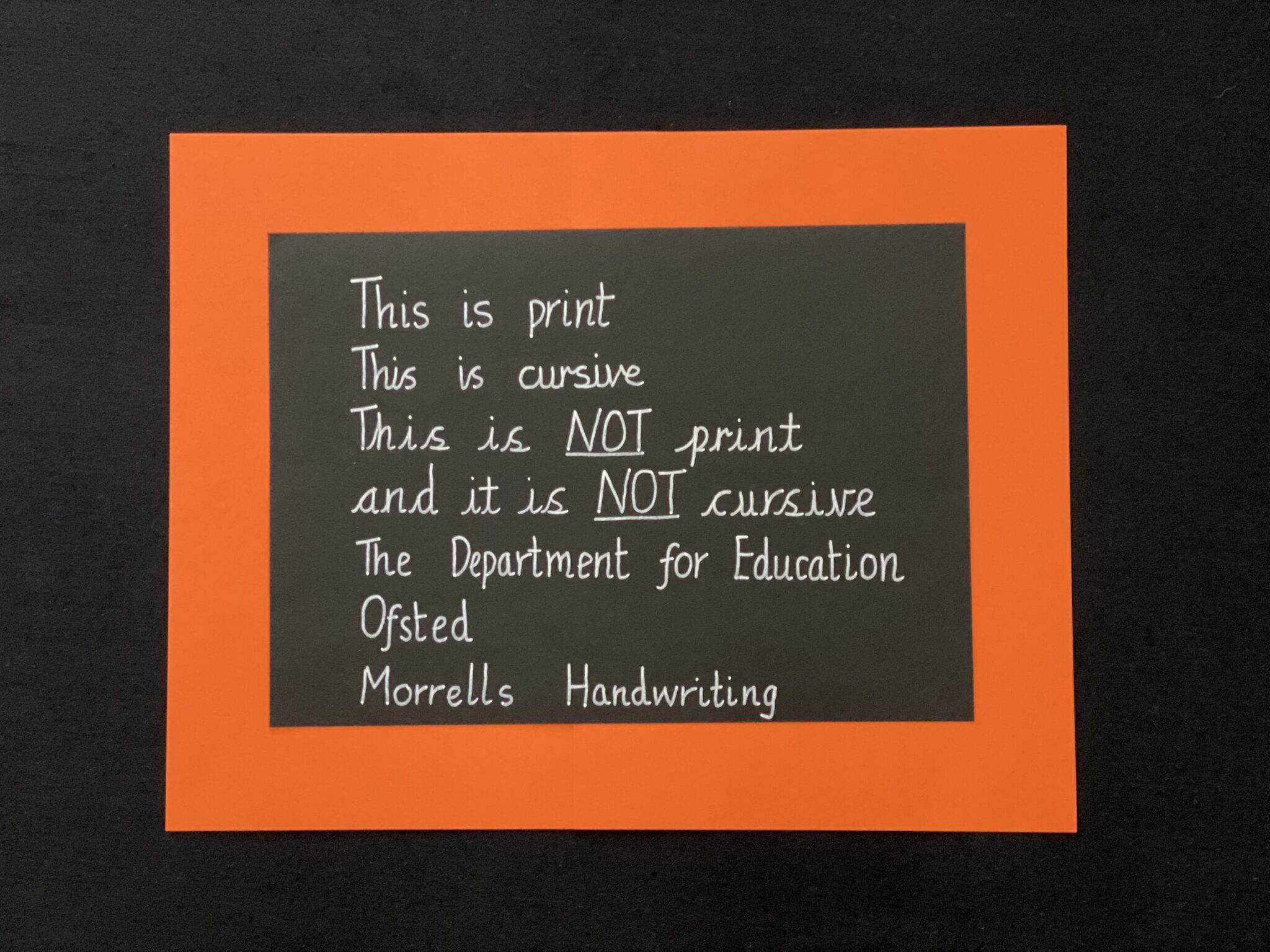 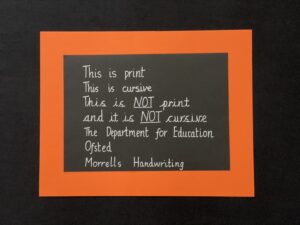 Last month, the Department for Education (DfE) took the first steps to ending the pre-cursive script with the lead-in stroke, and cursive handwriting from the start for all early-years foundation stage pupils.

In this blog, I will explain why this is a monumental moment, dispelling the myths and the fears that hoodwinked schools into rolling out cursive handwriting from the start and pre-cursive with the lead-in stroke.

I will also be sharing my evidence and highlighting why I have tirelessly campaigned for an end to this outdated practice that has caused misery for so many children and parents.

The news by the DfE was slipped in silently as part of the supporting documents for the validation of the systematic synthetic phonics programmes (SSP).

This government document for the teaching of phonics is clearly the first round from the DfE in ensuring the lead-in stroke is banished from our schools for good.

Take heed – ignore at your peril

Let’s be clear, the DfE are sending a significant message to all nursery, pre-prep, primary schools and publishers. Simply ignoring it is not an option.

In their guidance the DfE wrote ‘All resources designed for children to read should be in print’. Curtailing the lead-in stroke at source puts an end to this script being used in resources intended for reading around the classroom i.e. notices, signs, worksheets, letters, books and teaching resources.

This latest move from the DfE follows on from the call by Ofsted to stop the misinterpretation of the statutory framework which sets the standards of learning.

Ofsted are very clear in their guidance on teaching pre-cursive and cursive from the start in their ‘Bold Beginnings’ report, where they stated that ‘children needed to be able to form all letters correctly and consistently before joined-up handwriting was considered’.

They continued, ‘This is forming lower-case letters in the correct direction, starting and finishing in the right place’.

Furthermore, in this report ‘nearly all the headteachers were unanimous in their view that they did not teach a cursive or pre-cursive script in reception’.

Despite the Ofsted report, schools continued to teach pre-cursive with the lead-in stroke and cursive from the start. This is why the DfE had to step in and why ministers have stated that schools will be held to account.

Trendfear – the reason why pre-cursive is taught in your school

The pre-cursive with the lead-in stroke was never a statutory requirement from the government. It is just a craze, fad, trend that was introduced to schools by special needs groups as a quick method for teaching handwriting.

It rapidly picked up traction based on ‘trendfear’ – a sense of anxiety that one is missing out on something big. Once started, trendfear picked up momentum and rippled through primary schools and seeped into nursery schools.

For clarification, the lead-in stroke was never intended as a handwriting style for young, emerging writers. Its only purpose was to aid the flow of ink from fountain pens.

Evidence submitted during my meeting with the DfE highlighted that the handwriting statements in both the National Curriculum and the SAT’s had driven this unintended behaviour.

Using the word ‘correct’ was open to interpretation because not enough guidance had been given to teachers who had never had formal handwriting training during their Initial Teacher Training (ITT).

Unfortunately, many Welsh and Scottish educators, and indeed many educators across the world have blindly followed other educators, teaching pre-cursive with the lead-in stroke and cursive handwriting from the start when there was no requirement to do so.

Many schools wrongly believed that they needed to teach a fully cursive script ready for Year 2 and Year 6 Key Stage 1 and 2 SAT’s. This is a myth, fuelled by trendfear.

The greater depth statement for Year 2 Key Stage 1 SAT’s clearly uses the word ‘some’ in the statement: ‘use the diagonal and horizontal strokes needed to join some letters’.

Likewise, the Year 6 Key Stage 2 SAT’s never required a fully cursive script but refers to the National Curriculum which states: ‘pupils should be taught to use the diagonal and horizontal strokes that are needed to join letters and understand which letters, when adjacent to one another, are best left unjoined’.

Teaching a fully cursive script from reception to tick the boxes for Year 2 and 6 SAT’s is indefensible.

I’m not against cursive handwriting, which is joined-up handwriting without a lead-in stroke; I just loathe the teaching of this ludicrous pre-cursive script with the entry and exit stroke.

The name ‘cursive’ which means to flow, was hijacked and put into a term called ‘pre-cursive’ and ‘continuous cursive’, where a single letter has a flick on the beginning and at the end.

Cursive handwriting must be taught correctly at the right age, from 7 years old. You are misguided if you believe 3 to 6-year-olds should write in a cursive style before they are able to read a printed letter. 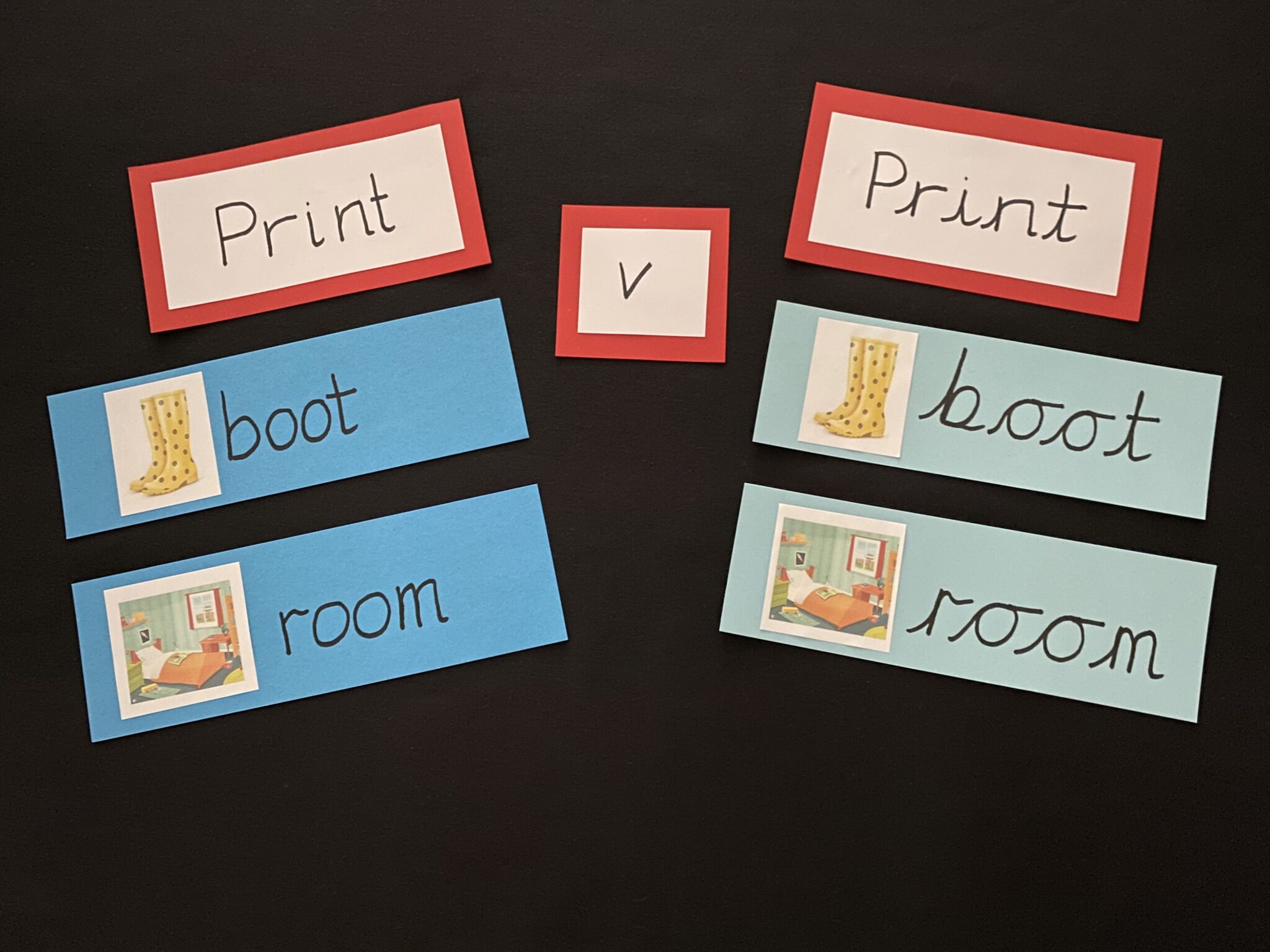 I’ve always known that teaching the lead-in stroke and cursive from the start before a child can recognise simple letters causes a myriad of developmental issues. These can last a lifetime resulting in poor academic achievement, especially at secondary school.

This is why I compiled substantial evidence and submitted it to ministers and the DfE. An immediate investigation was called.

My ongoing research and evidence shows that schools should not be teaching these complex strokes on single letters when a child has not developed binocular vision; good postural control and bi-lateral integration of motor skills, which usually develop around 7 years of age.

The complex skill of handwriting involves many cognitive processes. It requires good letter perception with visual and motor perceptual skills.

Cognitive overload occurs when the writer does not have sufficient cognitive resources to write letters and words.

My evidence from working with thousands of secondary school children has shown that the lead-in stroke places a significant burden on working memory and prevents the writer from getting their thoughts and ideas down onto paper. This is more evident in test conditions when the writer has time restrictions, thus having a significant impact on academic achievement.

Likewise, there is ample evidence from academics linking poor handwriting to a retained primitive reflex. I highlighted this in 2017 when asked why there was an increase in children being diagnosed with dyspraxic tendencies.

Children were failing to hit developing milestones with delays in postural control, poor muscle tone and delayed motor development. Children were struggling to grip a pencil correctly; slouching in their chair; wrapping their legs around the chair and they had poor integration of motor skills.

In brief, a primitive reflex is retained when the brain and body go into survival mode. This can be from a difficult birth or a later trauma. In particular, the Symmetrical Tonic Neck Reflex (STNR) affects the motor skills needed for handwriting.

Without intervention and the correct teaching of a systematic handwriting program, the retained primitive reflex will cause a wealth of difficulties for the child and they may never have the same motor skills levels as their peers. Teaching pre-cursive from the start to these children is unethical.

That is why my handwriting books have never followed the pre-cursive trend and why all of my resources follow the science of learning to write, using a font created by renowned experts in the field of reading and writing. 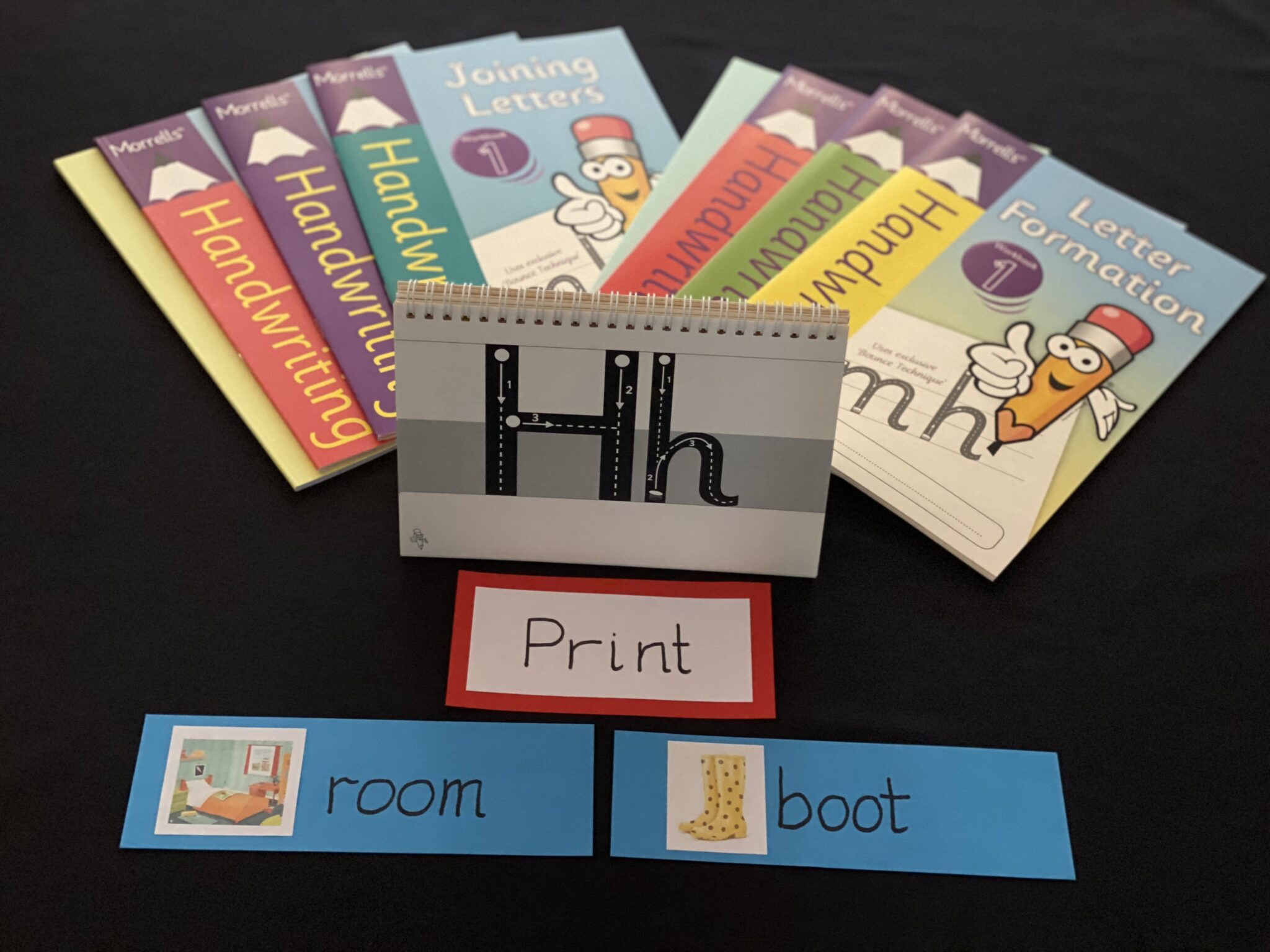 I have not finished campaigning. Many teachers were unable to make informed choices because they had not been taught handwriting during their teacher training.

Misinformation has led to teachers having to change their own handwriting style and write in a pre-cursive script with the lead-in stroke, staying behind after school to add in the lead-in stroke to either their work or their classes work.

I will also continue lobbying for help for left-handers.

Cursive handwriting is especially difficult for left-handers and there is no statutory requirement to give specific teaching to left-handers. This leaves many left-handers having to cope with a ‘hook’ despite it being easy to correct.

My mission is for all teachers to have access to quality handwriting training by handwriting experts like ourselves.